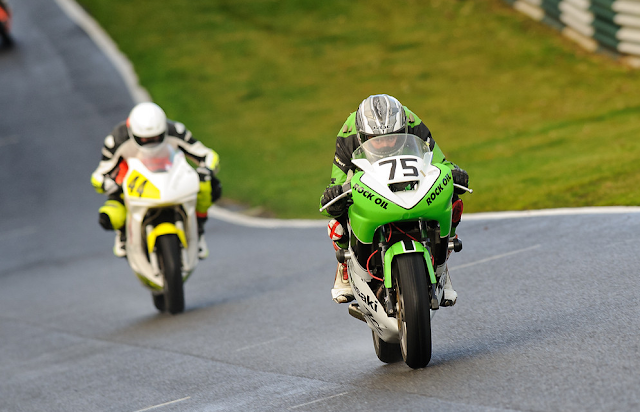 New kid on the block Nick Anderson, the Scarborough Uni pre-graduate debuted for team RMKD in the F400 / Mini thunderbikes class. The invincible Dan Frear made his debut onboard his new ER-6 Supertwin, which meant a win was almost impossible.

With too much youthful exuberence earlier in the weekend, and a few dubious technical infringements on behalf of the Derby Phoenix technical staff, it was left to the last outing of the weekend to grind out a result. With Dan Frear heading home due to having unsuitable tyres for the wet conditions, Nick could see nobody to challenge his pace in the mini-thunderbikes class. Stepping onto the stock ER for the first time all weekend from the back of the grid, Nick wasted no time in catching the bumbling pack. Powered by his new RMKD engine Dan stamper being the only person to shine out in the gloomy conditions. By the end of lap 2, Nick was in a dominant lead in the mini-thunderbikes class, chasing BSB bound Stamper for outright victory. He pulled further away from rivals in his class, finishing 4 seconds behind outright winner Dan Stamper. He confidently pointed towards the sky whilst wearing his winners cap, before later slurping a celebratory drink of champers from his winners pot, which he had rightfully earned.

With his feet now well and truly locked under the RMKD table after that sterling result, it has now left team boss Roger Middleton with a dilemna of how quickly to move onto the next level.