ARE MINGI TWINS THE FUTURE?? i hope not!! 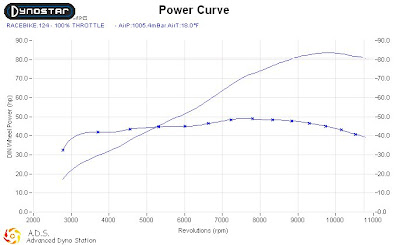 A friend asked me if id have a look at his ER6 (650 Kawasaki twin) to see if i could get a bit more power for the Thundersport GB junior power bike class...Hmmm....im not a mingi twin person really....but it is Kawasaki after all...and i want something 'up my sleeve' if the 400 class declines much more. So... we increased the compression a bit...had a bit of a play with the ports and put in a couple of reprofiled cams,machined the pistons.Then a trip to my good friend...John Warrinton at Malton for him to work his magic on his dyno....and 'hey presto' 84.6 bhp and 49ft/lb of torque. Im not sure what they make as standard?? But he's got a grin from 'ear to ear' so i guess its better?
Posted by RMKD at 15:06 No comments: 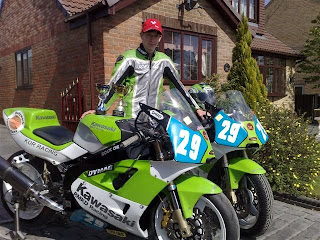 When Steve Ruddy said pre-season 'if i didnt think we could win it we wouldnt be entering it'...talking of the Derby Pheonix F400 Championship. And with the quality of Welsh,Ellecker,Percival,Armour,Pett ect, all sub 1m40's lads round Cadwell a 'tall order i thought?. But 15yr old school lad Kingsley is going to be the man...or boy to beat. With two good bike's to pick from...and more potential from the bikes and alot more from Kings who would bet against him? Two wins a second and a DNF (due to a faulty wireing block) he now leads the Championship along with injured Paul Ellecker.
Things didnt go as expected for Josh'the jerk'Leaning on the RMKD number 1 bike after getting up to 6th from the back of a full grid more was expected in race2. Riding the bike that has lapped in the 1m37's in the hands of Mike Saunders and more recently Dan Frear who took it to the lap record 1m37.5s...he chucked it 'up the road' at Charlies 2,damaging it quite badly. He did redeem himself in the last f400 race when he brought Rik Connels ex RMKD machine home in second place behind the talented two stroke mounted Freddy Pett. Youger brother Will Leaning had three good results and a personal best in the 1m46s and still leads the novice championship on yet another RMKD zxr400. I must also give Arron Hopper alot of credit for finishing 3rd in the last race...a novice and new to wet weather riding he brought his standard bike home for his first podium.
Posted by RMKD at 13:13 2 comments:

gton Park...a freak incident denied him his first win,when challenging for the lead two Dogs escaped onto the track and the race was red flagged. On the restart Ross was forced to the back of the grid with a dead engine and push started on the drop of the flag,which he never recovered from. It was only the small bunch of spectators that noticed the dogs and shouted...'eigh up thas two bluddy dogs ont track' we initially thought Peter Hillaby had employed some lower grade 'brolly dollys' to spice up the meeting but they were actually the four legged variety much to our disapointment!
Posted by RMKD at 15:13 No comments: