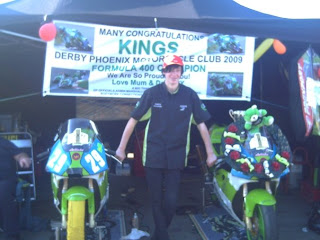 Silverware ahoy for 15 yr old Kingsley Ruddy, 2009 Derby Phoenix F400 champion.
Rarely do you see riders this young with such consistency but Kings has shown the numerous ex champions in this class a display of not only superb pace but extraordinary maturity on track.
The title was already won prior to this, the final round and Kings set out on track complete with winners shirt over his leathers for race one. In a cruel twist of fate the youngster suffered his only crash of the season whilst in a fierce battle at the front, tearing his commemorative vest in the tumble. Race two saw Kings piloting his RMKD ZXR400 on a spectacular charge through the field from dead last to 2nd behind the ever rapid Alan Armour on his trusty Suzuki RGV 250.
Sundays races both saw Kings first over the line but an unfortunate 5 sec penalty in the final race for finding the ultimate line through the chicane put him 2nd on corrected time behind another talented youngster, Josh Leaning (also RMKD ZXR400).
Many congratulations Kings and good luck to a bright future!
Posted by MichaelSaunders at 17:07 3 comments: 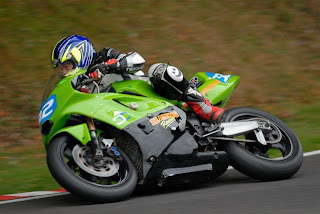 16 year old Will Leaning wrapped up the Derby Phoenix F400 novice championship in great style last weekend.
With a 95 point cushion at the head of the table Will could have been forgiven for playing it safe at the season finale and scavenging just enough points to make the title his, but no, Will fired his RMKD tuned ZXR400 to 4 class wins, bringing his times down considerably and even scoring an overall 3rd place. Bearing in mind the experience and pace of the competition congratulations really are in order for such a performance.
Posted by MichaelSaunders at 15:28 6 comments: Dan Frear has had it all his own way in the 400 class at Scarborough this year. However, at this meeting there was a high profile new challenger to contend with. TT Winner and current master of the Irish roads Ryan Farquhar had brought his Kawasaki ER6 minitwin across to Olivers Mount. In Ireland the minitwins can be tuned and race alongside the 400s, a class in which Ryan is considered unbeatable.
The scene was set for an epic battle and when the first race got underway Farquhar got away first chased by Dave Bell (Kawasaki ER6) and Dan. Ryan wasted no time in posting up a lap record in the 1m 53s but Dan responded well, passing Dave Bell and chasing Ryan down, Dan passed Ryan and gently eased a gap, smashing his own lap record by 2.1 secs with a 1m 52.8s, Dan calmly pulled away to win by an incredible 14 seconds.
Following the race the knives were fully out for Dan and the RMKD team. An official complaint was lodged, and a request to strip the teams' ZXR 400 was upheld (see seperate story).
The bike was of course found to be legal and was rebuilt ready for battle no2 on Sunday. With a fresh clutch in the bike, Dan powered away from the line into a strong lead and when Ryan Farquhar retired due to an injury sustained in the 600 race, Dan controlled his pace to ease the little 398cc RMKD Kawasaki home to a 10 second win over the stylish Dave Bell.
Posted by MichaelSaunders at 07:49 1 comment: 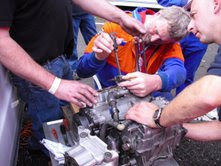 Ever since RMKD racing have been building ZXR 400 engines there has been the usual paddock mutterings with reference to the bikes' speed and ultimately their legality. We've heard claims ranging from big bore kits to long stroke cranks and even using a 600cc engine.
Following yet another amazing win by Dan Frear at Olivers mount the rumour mill was at full steam and put in an official complaint requesting an engine strip and capacity measurement. Despite feeling unfairly treated as such procedures are generally left until the end of the racing weekend, RMKD Racing agreed for the technical team at Auto 66 to remove, strip, and inspect the engine after Saturday's record breaking race.
The measurements came back at 398cc and all aspects of the engine were found to be legal for F400 competition.
The bike then had to be fully rebuilt by RMKD (with thanks to Joe Hicks and Russ Button) overnight in preparation for Sunday's racing.
The team's hard work to get back on the grid was repayed by Dan with an emphatic victory.

In summary: if you want to go as fast as Dan, you need a RMKD engine. Oh, and bags of talent helps.
Posted by MichaelSaunders at 05:03 No comments: