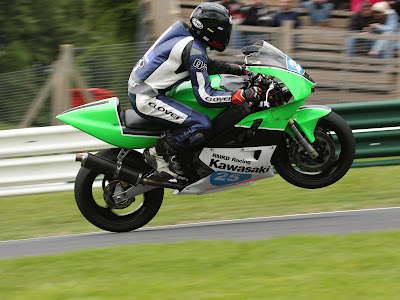 Dan Frear made it look easy on board the RMKD zxr400 when he blasted his way from 31st on the grid to win by an amazing 12 sec's...breaking the club lap record on all four flying laps.Finally beating it by 1.8 secs at 1m38.4. Race2/the final,again he shot straight to the front and won by 16 sec's...leaving championship leader Chris Beverly with no answer.
Sunday was slightly more difficult as heavy rain fell all day...Dan played it safe and decided a front row was a safer option and again came from 31st through to 2nd,which secured that slot on the grid for the final...which he again won.
Sixteen year old Will Leaning also had a good Sunday 'splash around' taking 4th in the 400 qualifier and 2nd in the final and 2nd in the 400 newcomer.
Graham(bud) Frear encountered a gearbox problem on his cbr600rr after qualifying poll for the 'Phoenix open' final...but with the heavy rain still falling he was loaned 'Will's RMKD zxr400...But only allowed to start at the back of the grid? a 'hopeless task'? with some top national riders in the field ! 'Fearless 'bud' Frear' brought the little Kawasaki home to an amazing 6th place.
Ben Cole now benifitting from a few more 'rmkd horses' had an excellent 4th place in Saturdays 400 qualifier but was denied making the final with an off in the 'streetstocks'...which cut his meeting short with a broken finger. Hope it mends quick!
Posted by RMKD at 07:44 No comments: 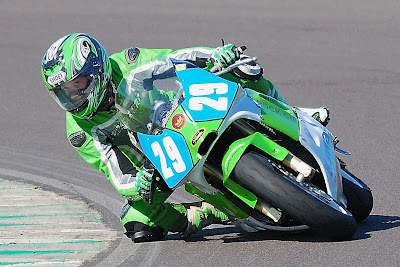 Young Kingsley Ruddy on board his RMKD powered zxr400 was in dominant form on his first visit to Anglesey, despite his Friday practice session being cut short due to fog he was soon on the pace in the first race of the day. Leading from the flag Kings dipped under the lap record to take the win...but it was Ritchie Welsh who took the lap record but couldnt match the consistant pace of the youngster and came home second. Race two followed the same format but again the lap record fell to Kings 1m36.26. Sunday morning arrived and the 'Wiley Welsh' had his game plan sorted...and it worked he out witted the 15year old Kings whos tyres were passed there best. A new set of tyres revived the confidence and again he dominated the race from the flag and again reduced his lap record to 1m36.16...He now leads the championship by a massive 75 points, from some very established exF400 champions.
Will Leaning also RMKD mounted had some solid mid pack results to consolidate his f400 novice championship lead. Elder brother Josh...not content to sit and watch on Sunday loaned Wills spare bike and had a best result of 4th despite only having three practice laps.
Well done you younguns...15...16 and 18 respectivly.
Posted by RMKD at 14:35 1 comment: