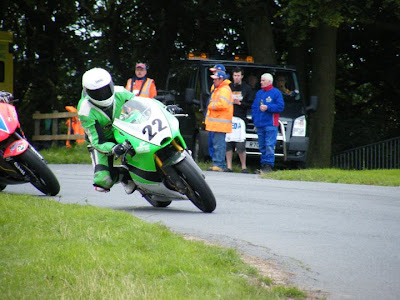 The RMKD team were anxious about the debut meeting of their newly finished ER6 Supertwin as they headed to Olivers Mount. A few laps of Cadwell Park 3 weeks earlier had showed its potential but hardly a shakedown and with Ryan Farquhar, Adrian Archibald,Ian Lougher and Ian Pattinson in the line up it was going to be a tough call.

Free practice showed a few flaws in the suspension set up and adjustments were made. Timed qualifying was next up and Dan Frear was on the money...setting pole and dipping under Farquhars lap record. Everything going to plan and more ! unfortunatly whilst leading from the off Dan encountered a slight problem with the throttle and had to retire, the 'problem' which we thought we had cured then occured again in Sundays race and again he retired the ER. A little bit dissapointed but not disheartened by the 'straight out th 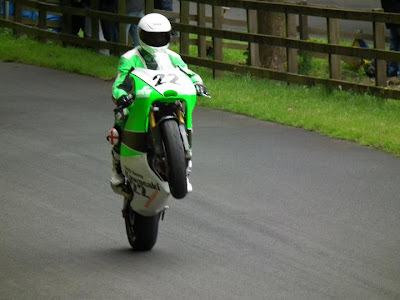 Dan also rode the RMKD ZXR 398cc and the results were a formality,no one getting within 4 seconds of his lap time and he brought the little Kawasaki home untroubled some 20 seconds ahead of his nearest rival James Cowton on his Honda.