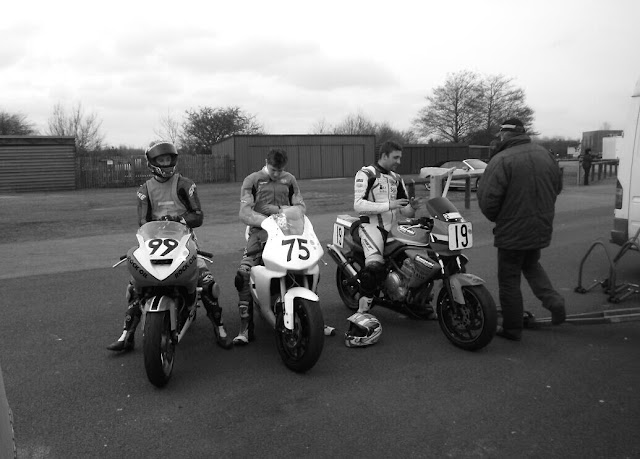 RMKD's season opener was a trip to the North Yorkshire circuit, Croft; fielding a two rider team. Dave Bell now riding his trait ER6 retro, a similar bike to which he has had much past success. Nick Anderson gave the newly acquired SV 650 its maiden outing.

Bell was soon on the pace and won the first three races of the weekend in his minitwin class. In the final outing, Dave pulled away from the field to earn his first outright victory of the season in dominating style. Anderson, hampered by his 'camp' £12 eBay leathers put in some productive performances, steadily improving his lap times throughout the weekend; culminating with a 3rd place in the supertwin class.

Young James Tadman guested for the team on the Sunday and made an instant impact with no more than a warm up lap to get acquainted with the ex Anderson stock ER6, lapping 5 seconds faster than his previous best on board his own ZXR 400 Kawasaki. The talented recruit Tadman next heads to Cadwell Park for the NG meeting on the weekend of 27/28th April.