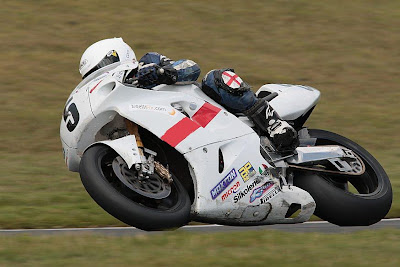 Dan Frears return to the RMKD team didnt quite go to plan, after breaking his foot badly whilst competing in the prestigious BSB superstock at Cadwell he could have done with a bit of luck to make his track return.Opting to ride the 750 Kawasaki in view to running it at Scarboroughs Gold cup in September. Not the latest machinery from the Kawasaki factory but certainly not short on bhp and pedigree, he was hoping to raise a few eye brows. With only a 20min qualifying session to get aquainted with the bike,but a flat battery cut that short...in fact 5 laps and a qualifying position of 17th, it was going to be hard work to carve out a result. Undetered Dan was getting more familiar with the bike as the weekend went on. In Sundays last race he was in a podium postion untill his ankle injury plagued him and he had to settle for 5th which was his best result of the weekend, not bad for a 15year old zxr750! 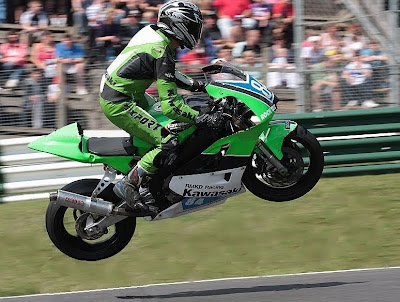 Graham 'Bud' Frear didnt have much luck either,choosing to ride the newly finished GP2 spec zxr4 he was in a similar position to Dan having only 20mins to learn and qualify on the bike, but he pitted after one lap with a 'tight' engine...as we hurriedly aborted plans to use the new bike and run the F400 bike we returned to the paddock to realise we had robbed the battery for the 750. Which gave him just 3 laps to put a qualifier in and a position of 20th on the very competative grid. The luck did turn tho and a best result of 5th and his best time ever on a 400 of 1m37.7 was impressive.

Alex Huchinson with an RMKD powered zxr was also in impressive form in the GP2 class with two wins and two seconds and a best lap of 1m36.4! Undoubtedly the best lap by a zx4 round Cadwell ever ! Alex now has a comfotable lead in the GP2 championship over Alex Heaton.
Posted by RMKD at 14:13