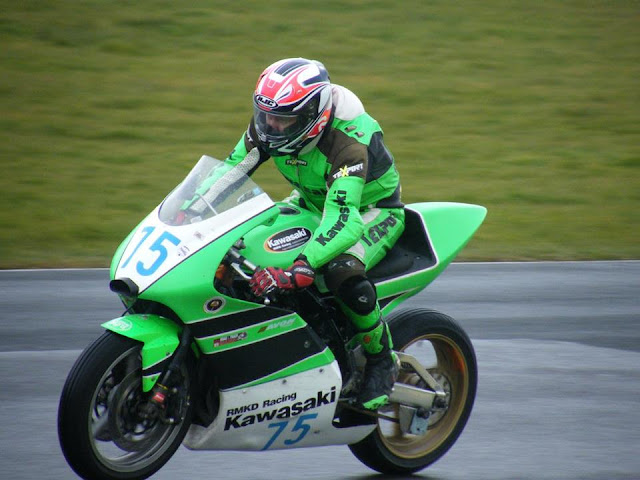 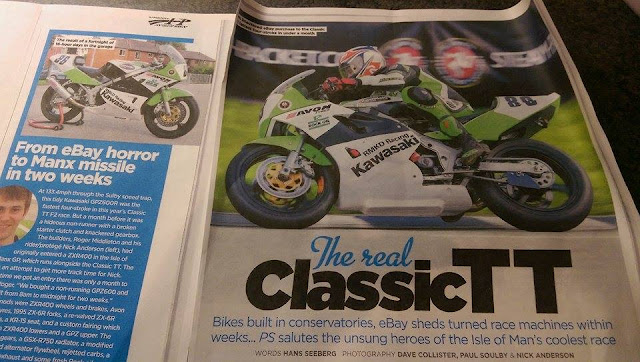 Our 1985 Kawasaki GPZ 600r F2 Classic race bike featured in November's issue of Practical Sports Bikes magazine is for sale. This was 9th overall and won a silver replica in this years Isle of Man Classic TT, and was the fastest 4 stroke F2 bike down the Sulby straight at 133.4MPH. 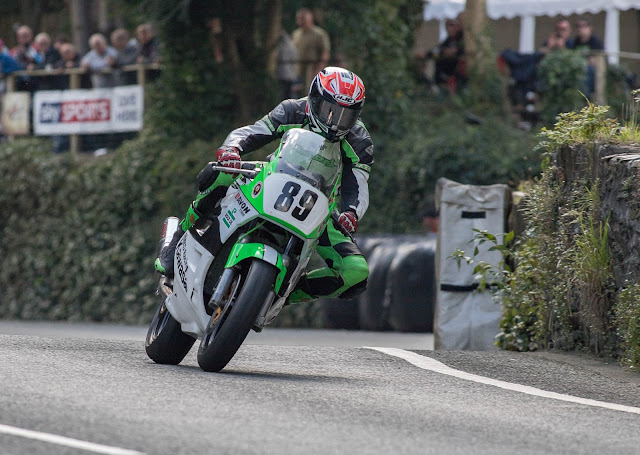 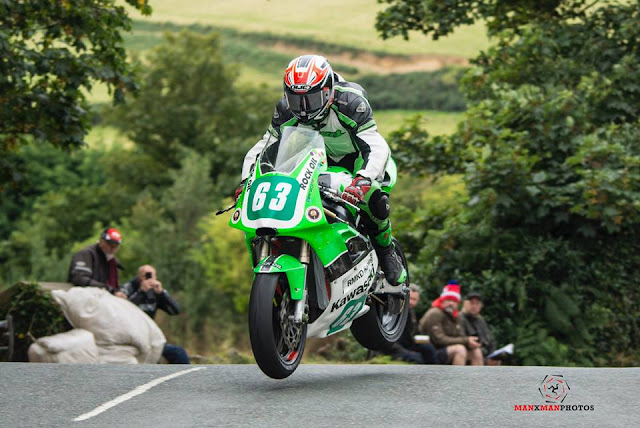 As a mid-season project, Nick and Roger at RMKD decided to turn a ZXR 400 non-runner out of Roger's workshop into a decent spec'd affordable race bike. After around 3 weeks work, in which the bike was completely stripped down to every nut and bolt to be serviced, the spec was upgraded to:

Considering there are a lot of 'knocked about' race bikes going around at the moment, we didn't think this was a bad buy at just over 2k.

Take note of the seat unit... these are the latest design and available to buy now!

Two weeks prior, this 1992 Kawasaki ZXR 750 J1 was a non-running shed. Roger at RMKD transformed  it into a Formula 1 Classic TT worthy bike thanks to a big clean up misson.

We got the bike to the Sheene Classic meeting at Oliver's Mount, but unfortunately had brake issues.

However, the meeting was rescued with a decent 3rd place outright in Sunday's supertwin race on the team's carburated ER6.

The first proper outing since the Manx Grand Prix was the Spring Cup at Oliver's Mount, and Nick's first time on a bike in 2015.

We brought the 400 ZXR and two Kawasaki ER6 supertwins. It wasn't ideal that the rain fell heavily on the Saturday morning, resulting in a heavy crash for one of the Irish riders. This caused a long delay and meant that practice on both bikes was cancelled.

Qualifying on the 400 went well considering having no tracktime at all, putting it third on the grid and front row. The main problem was Nick having to get to grips with slipping the clutch out of the three tight hairpins, as the bike runs an SP close-ratio gearbox. The 650 supertwin qualifying took place as the track was drying out, and a choice of wets when it should have been dry tyres meant we qualified in 8th place.

By Saturday afternoon the track had dried out ready for both races. In the 400cc race, Nick came home in 5th place, which we knew could be improved on Sunday.

On Sunday morning, Nick dislocated his left shoulder on his first qualifying lap on the supertwin, and no lap time was set. Fortunately the problem was sorted quickly in the medical centre and he was able to make the start of the 400 race. We won outright by 10 seconds from Paul Owen on a Honda RS 250, and 44 seconds clear of TT legend Ian Lougher in very wet conditions.


The weekend culminated with the first outing of Roger's new home made tyre changer. This attracted much unwanted attention across the paddock; keeping Roger busy throughout Sunday afternoon. He even won a bottle of stale Russian bubbly for his efforts!
Posted by RMKD at 16:21 1 comment:

The much anticipated new RMKD Kawasaki ER6 supertwin was ready for the teams debut at the Manx Grand Prix, in which our year has been based around. Changes to this bike was using the injected fuelling system, as well as upgrading to a Versys swing arm. In addition, the short circuit carbed 650 was brought, and a third stock ER6 machine.

After a traumatising ferry journey (especially for Roger) we were ready for the first evenings practice - starting with the speed controlled lap. Nick got as far as Braddan Bridge before a faulty valve in the front brake master cylinder brought him to an abrupt end - less than 2 miles into the course. An extremely frustrating outcome, especially as the bikes had been meticulously prepared in anticipation for the event.

24 hours later and the bike had been repaired after a successful test at Jurby (a good do in itself!). The team was very nervous as anymore problems on our second newcomers lap could bring an early end to the meeting for us. Monday evening and Nick completed the speed controlled lap with no issues, followed by his first lap of regular practice without an instructor and a lap of 94MPH average.

Tuesday and Wednesday evening practice went without a hiccup, steadily increasing the lap speed to an average of 102.42MPH. That turned out to be the last practice before the races, as two consecutive attempts on Thursday and Friday on the carbed bike were halted at St Ninian's and Crosby respectively with electrical gremlins.

The newcomers race eventually arrived on Tuesday evening, feeling like forever since we were last on track. Nick started first on the road for the 650 class, and after being passed by hard charging local rider and eventual winner Dean Osborne, he managed to stay on his back wheel until the Gooseneck of lap 1. A race average of over 105MPH and a fantastic 3rd place finish was the result. The injected RMKD bike also one of the fastest through the Sulby speed trap at 139.5MPH.

Also, for the first time using AVON tyres we were extremely impressed, offering fantastic levels of grip and durability. We found they allowed the bike to turn a bit better than the Pirelli's on the front end; and given their competitive price we recommend the 'Avon 3D Xtreme'. A huge thanks to Steve Smith is owed for helping us get sorted with the tyres.

The final race was the supertwins, again increasing the lap times, with a standing start lap of 106.8MPH. A 17th place finish was the outcome - slightly disappointing losing several places on the last lap due to several yellow flags.

Thank you also to the tireless help of Colin Peters, whom not only fueled for us but also helped in every aspect of the meeting; as well as keeping us sane and entertained throughout the fortnight. Also, thanks to Richard for his assistance in getting the bike ready for the newcomers race.

Thank you to Adrian Earnshaw and the Mike Hailwood Foundation for their help and generous contribution. 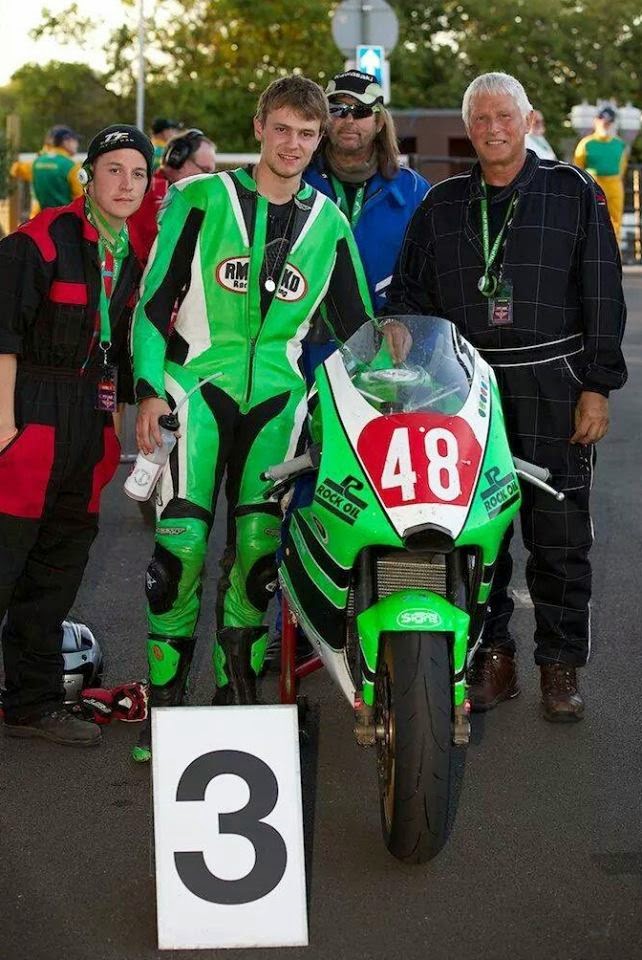